Bracken was threatening to engulf me. It was my fault as I had turned off the main path and was on an unfamiliar forest track. Before a sharp corner delving into a ghyll I spied a small side path striking upwards. I took it, it looked promising. The conifer plantation on either side though was dark, and uninviting.

It was only a narrow section, and climbing a stile I burst out into the open. Well, apart from the bracken. I could still hear the noise of the traffic, but here there was another sound. The cry of a buzzard high above me. Do they really hunt small prey like mice from up there? Or are they playing, circling higher on currents of air, dancing in the sky, just for fun? 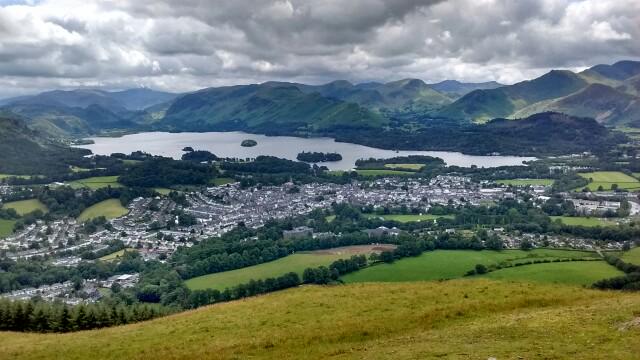 Looking down on Keswick and Derwent Water

I had crossed the bridge taking Spooney Green Lane over the A66, my ears ringing to the din of the traffic below. The cottage at the foot of the fell keeps hens, and there was a sign saying eggs for sale, but I didn't see any available. I climbed on, the track steep and wet from this morning's rain. I came to the viewpoint looking south to the Coledale Fells, to Causey Pike and many others. A Lycra clad couple had beaten me to it, we exchanged pleasantries about the view, and Jessie. Then they headed back down, running.

Only a little way above the viewpoint a forest track beckoned me away from the path. Tall banks carried even taller bracken. I was quickly hidden from view. Another path climbed the bank and took advantage of a fire break to strike upwards through the conifers to a fence. The stile was awkward but at least Jessie slipped easily under the fence. 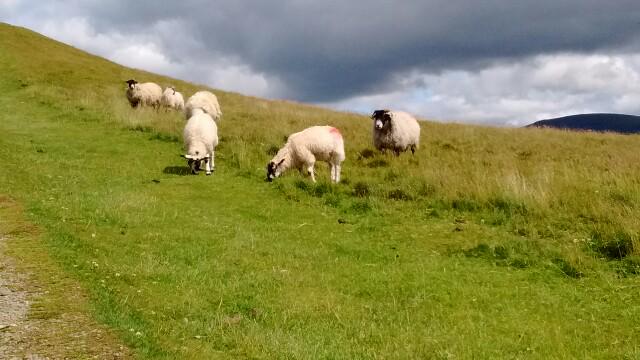 So there we were in amongst chest high bracken, a buzzard wheeling and crying in the sky overhead yet unnoticed by those on the path higher on the fell.

We passed the remains of a sheep stuck deep in a gorse bush. I wonder which came first. Did the bush claim the sheep, like a venus flytrap claims its prey. Or was it just the wool blown into the bush on the wind. We didn't look closely.

A large group was congregated at the bench, a meeting place of 'hellos' in different accents. Walking on to the summit, a group of children raced up from the bench to proudly claim the summit.

"But what makes this outcrop of rock the summit when the grass over there, and there, is at least the same height" I asked. The children looked shyly. An adult appeared behind me and said they would figure it out when the others arrived. Fair enough, I moved on. 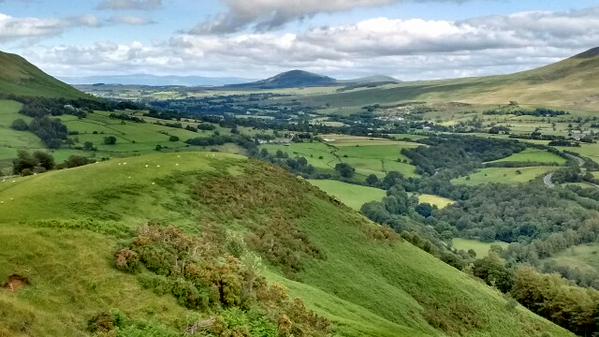 Great and Little Mell Fell under a clearing sky

The long grass east ridge of Latrigg descends gently. The dark bulk of Blencathra looming over us. Some distance ahead Great and Little Mell Fells arose from the rolling countryside. And across St John's in the Vale stood Clough Head. The group of different accents passed us, noisily, chattering in a foreign tongue. I slowed down to have the fell to myself. Looking over the edge of the ridge it didn't plunge down into the woods I as had thought, but dropped to a step, before falling again. Bracken had made its home there, out of the way of the chill breeze on the ridge top. 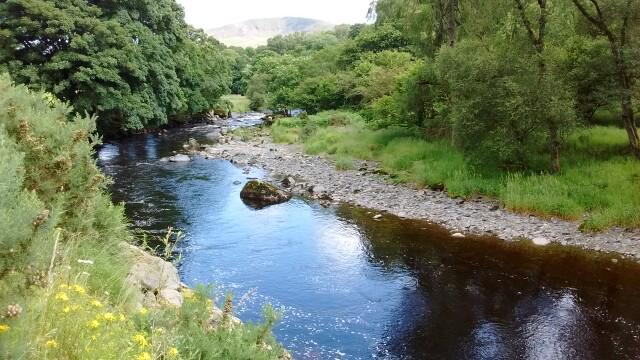 All too soon I was on tarmac again whilst dropping down the last bit to join the Keswick Railway Walk. This track runs between Keswick and Threkeld along the way of the old rail line. Rusting Victorian iron bridges cross and re-cross the river Greta. The decks are of modern wood, but what of the girders and massive rivets? Who looks after them now that the people who built them are long gone from this world? Looking down the Greta runs brown and peaty from the silt brought down from the high moors and fells by its tributaries. Occasionally cascading over rocks its noise is loud enough to drown out the unseen traffic. 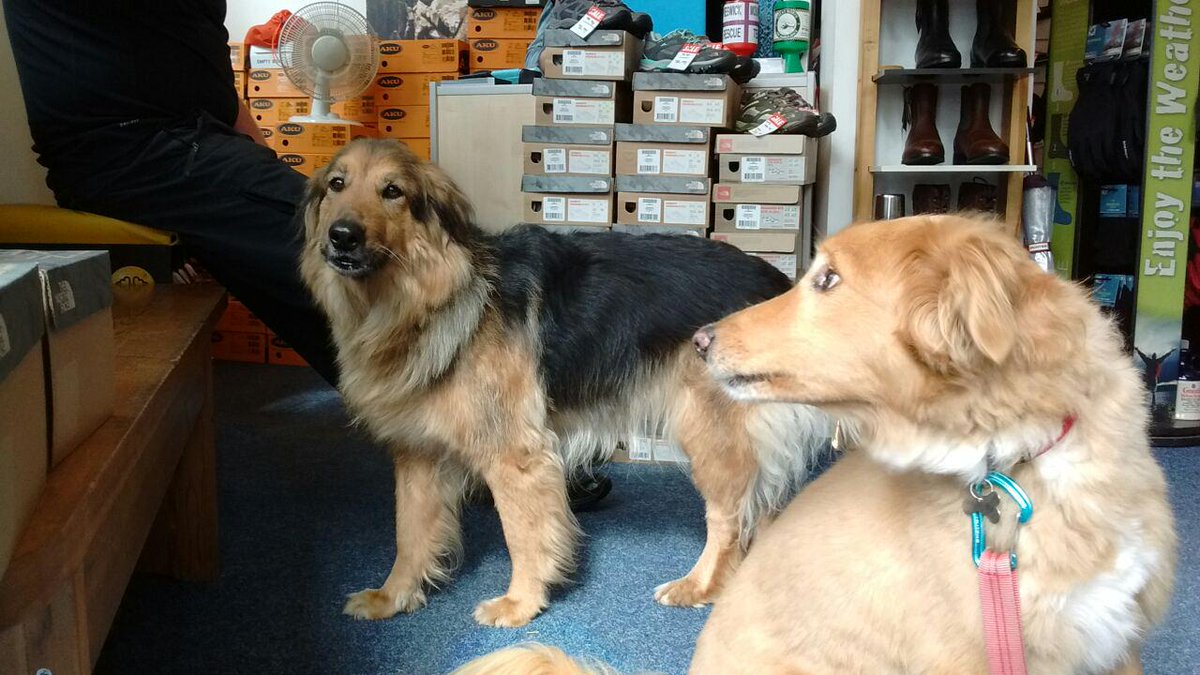 After a noisy if somewhat fine little walk I came back into the bustle of Keswick. Some of the shops still open on this Sunday afternoon. Jessie pulls me into The Keswick Boot Co's door. Never one to pass up the possibility of a gravy bone she is rarely disappointed. Feeding her three or maybe four times a day is obviously too little.

If you want to do this walk yourself it is essentially The Old Keswick Railway Line and Latrigg walked in reverse.