The mountain weather forecasts had been suggesting a good day, so I made another trip to the Lakes on Monday, (17th July), for a walk including Skiddaw. - It had been well over thirty years since I last did Skiddaw, so some of this walk really was a trip down memory lane! Photography was slightly hindered by UV heat haze, making it nigh on impossible to get good shots of distant fells, but it was quite a nice day for walking, with a pleasant cooling breeze for most of the day - although it was actually very windy on Skiddaw summit plateau.

Starting from the Underscar/Latrigg parking area, It was no more than a ten minute walk and about 300ft. of ascent to the top of Latrigg. - For the "fell-bagger", surely (from this start-point) the easiest of the 214 Wainwrights to tick-off, and with amazing views over Keswick and Derwentwater on offer: - 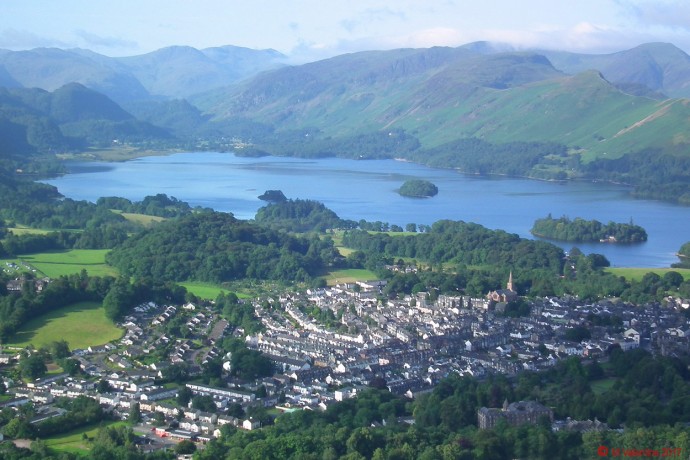 From the same spot, a shot looking towards the Causey Pike, Sail, Crag Hill ridge, with Grisedale Pike etc. over to the right: - 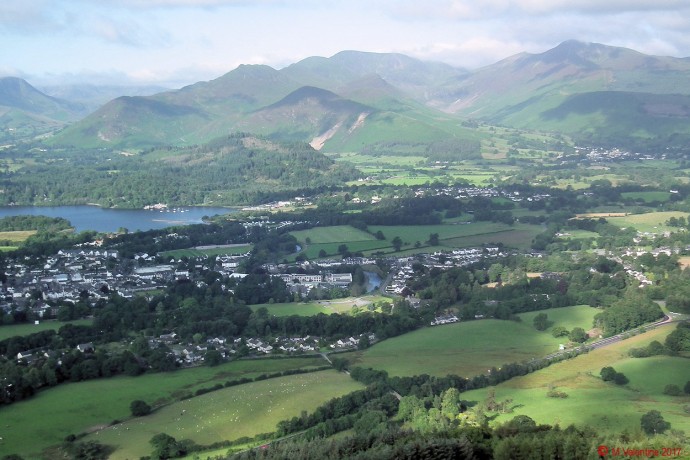 Dodd, towards the left hand side of this shot, was to be my next fell of the day. - And as yet, still quite a bit of cloud high up on the Skiddaw massif: - 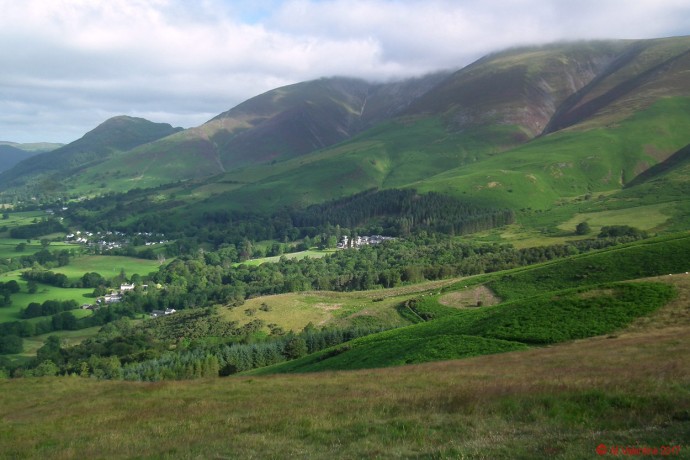 From Latrigg, I took the path through Birkett Wood, coming back out onto Underscar road, then walking along past the hamlets of Applethwaite and Millbeck. Along that road, gaps in the hedgerow gave some nice glimpses of other fells I'd recently climbed. Looking south-westwards to some of the "Newlands Horseshoe" fells - Catbells, Maiden Moor, Dale Head, & Hindscarth - from Applethwaite: - 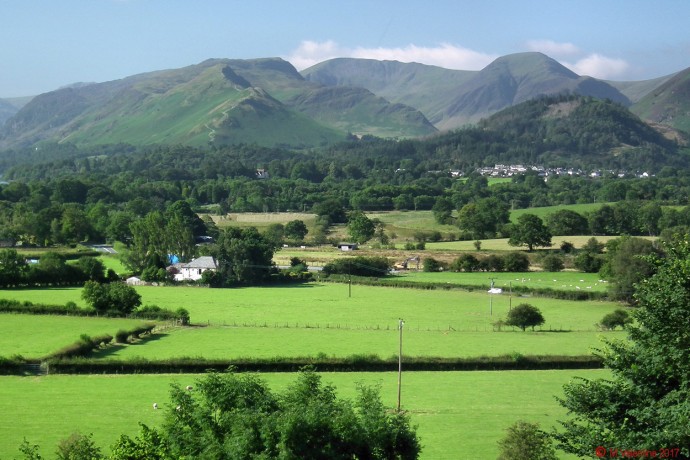 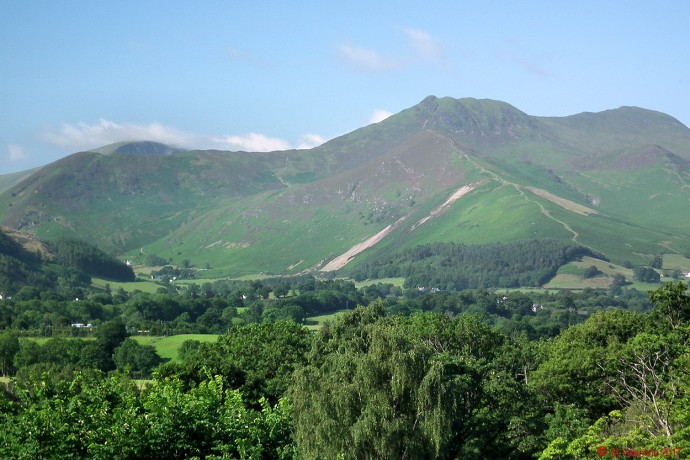 Not far beyond Millbeck, a footpath leads off rightwards to Lyzzick Woods, on the flanks of Dodd. Dodd is pretty well afforested on all sides, and reasonable progress can only be made by sticking to the forestry paths therein. However, I have a particular interest in mycology, and spent some time fungi hunting - so my route to Dodd summit wasn't necessarily the quickest or easiest! Lots of Larch Boletes, (Suillus grevillei), such as these, to be seen: - Occasional breaks in Dodd's tree cover gave views such as this, back towards Derwentwater: - 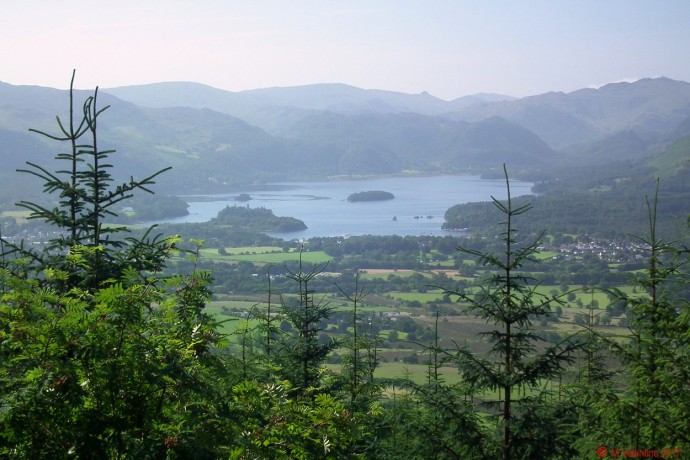 Towards Dodd summit, the tree coverage thins out, with this obvious path, here bordered by lots of Lady's Mantle (Alchemilla mollis) plants, fully in bloom: - 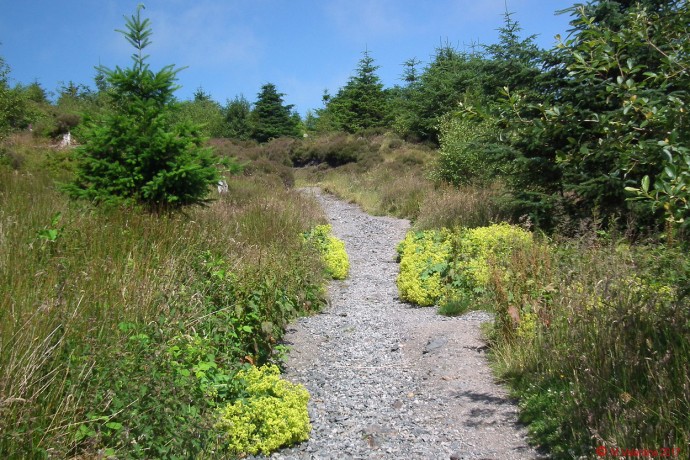 Lady's Mantle plays host to a "rust" fungus, Trachyspora intrusa, which can be found on the undersides of the leaves. One stage of which is this particularly striking orange colour: - 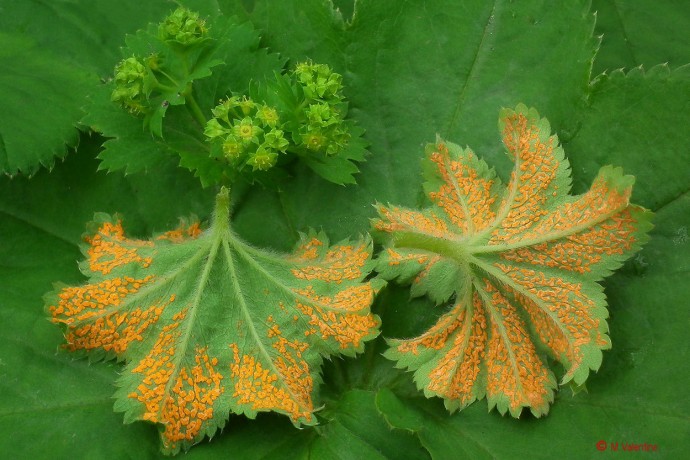 Having eventually reached Dodd summit after the fungal diversions, I was rewarded by this view of Carl Side, with Skiddaw summit just about peeping out above, and Skiddaw Little Man over to the right: - 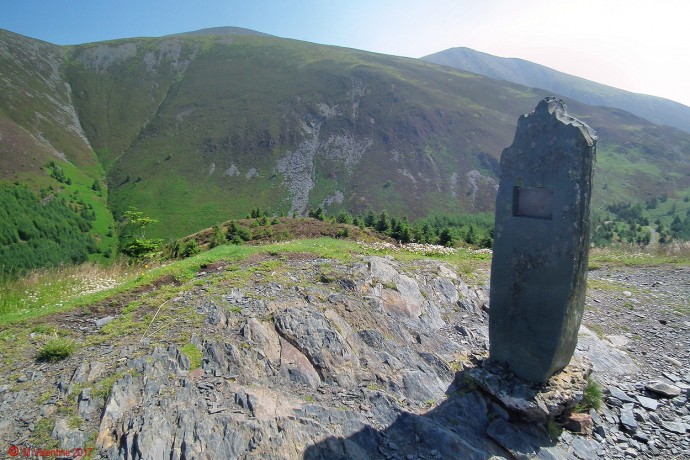 And from the same spot, looking in a north-westerly direction over Bassenthwaite Lake: - 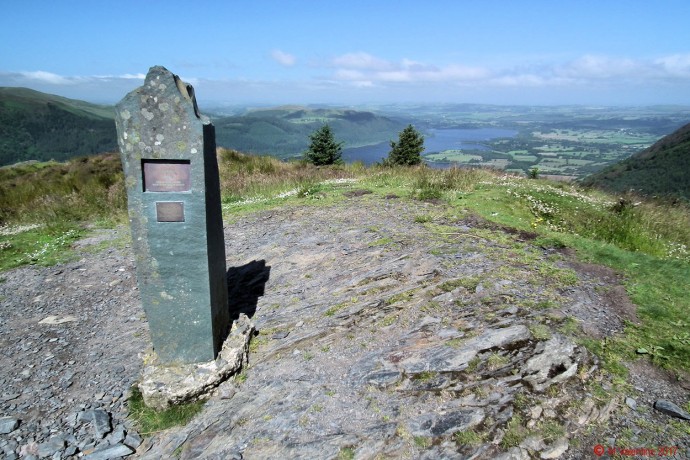 From Dodd there was an unavoidable descent, before beginning the seemingly endless ascent of Carl Side. Here, a shot looking back towards Derwentwater from the area of "White Stones", at about 1600ft. level. - The presence of much UV haze conspiring to mask the detail of the distant fells: - 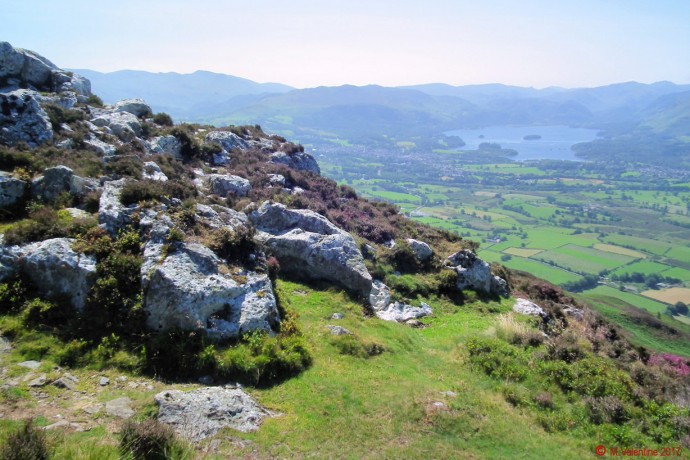 Carl Side reached, and the view across the mound of Longside Edge to Ullock Pike: - 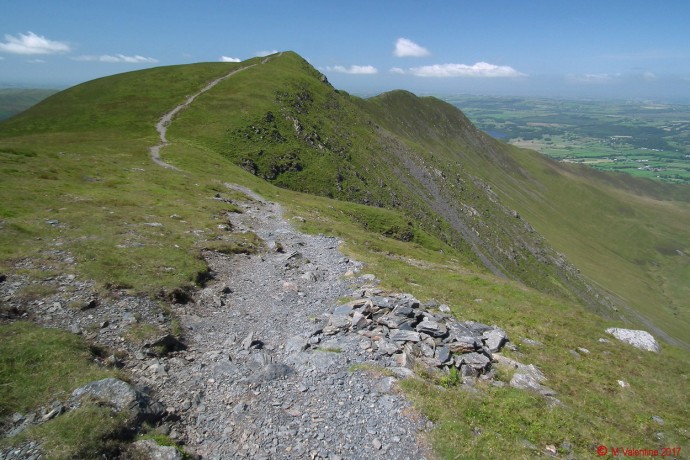 Looking back across Dodd and the Vale of Keswick, from the summit of Ullock Pike: - 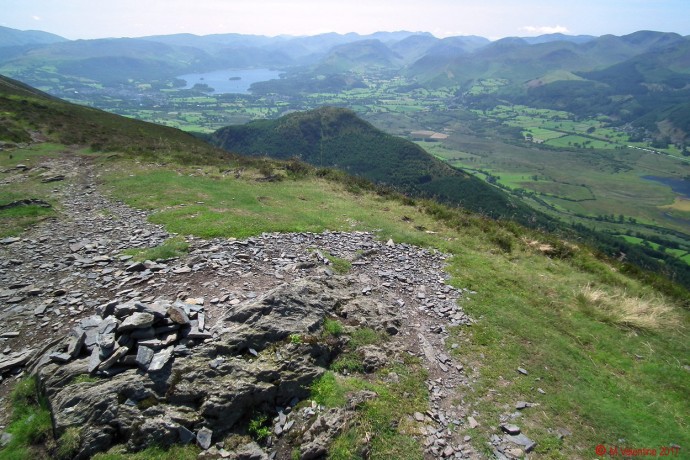 Skiddaw and part of the Longside Edge ridge, as seen on the way back across from Ullock Pike: - 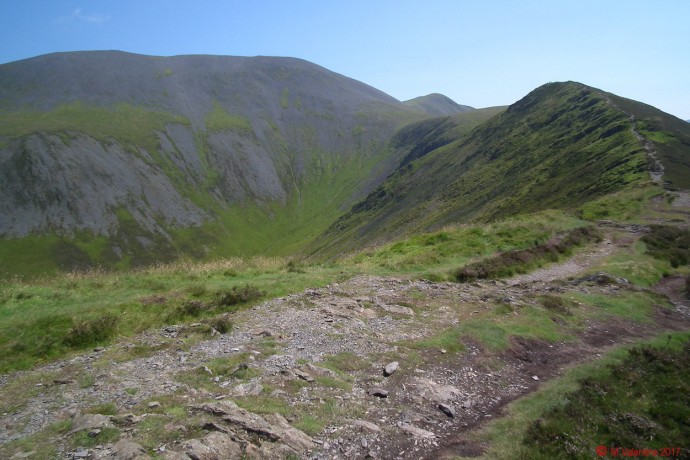 Now at the foot of the final steep slopes to Skiddaw summit, and a shot looking back to Longside Edge and Ullock Pike, from just beyond Carlside Tarn: - 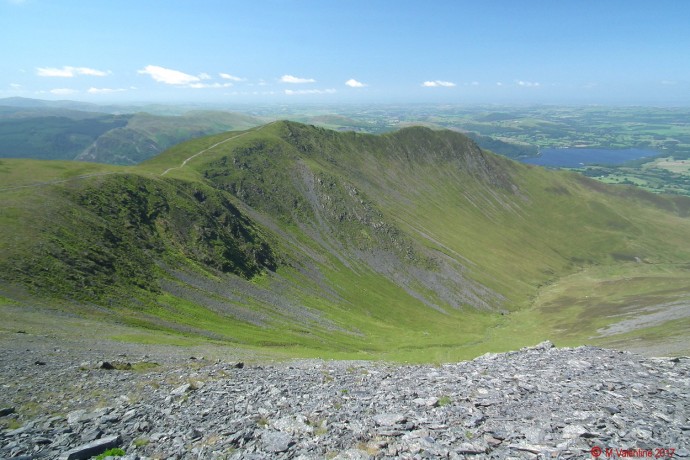 - The triangulation pillar has deteriorated considerably in the 30+ years since I was last here: - 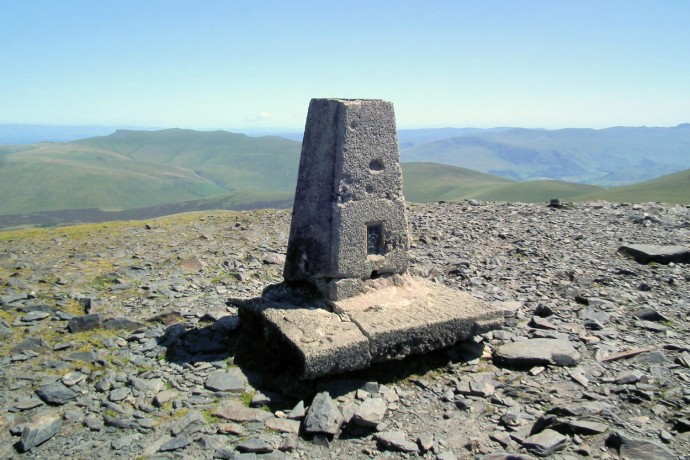 The summit "toposcope" wasn't here back in those days; - 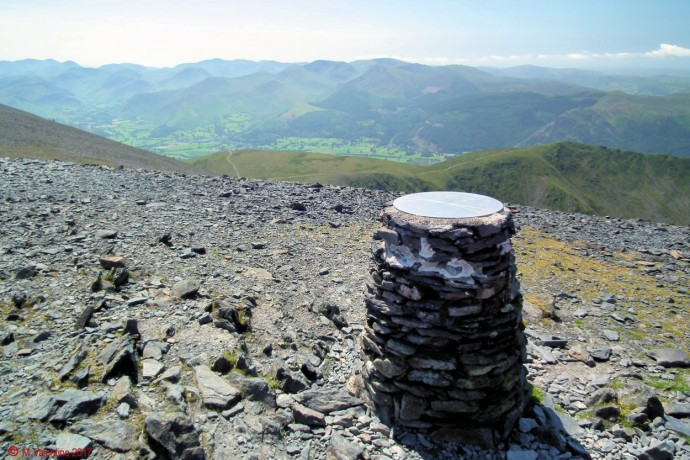 Blencathra, with Lonscale Pike to right hand side of shot, as seen from Skiddaw summit plateau: - 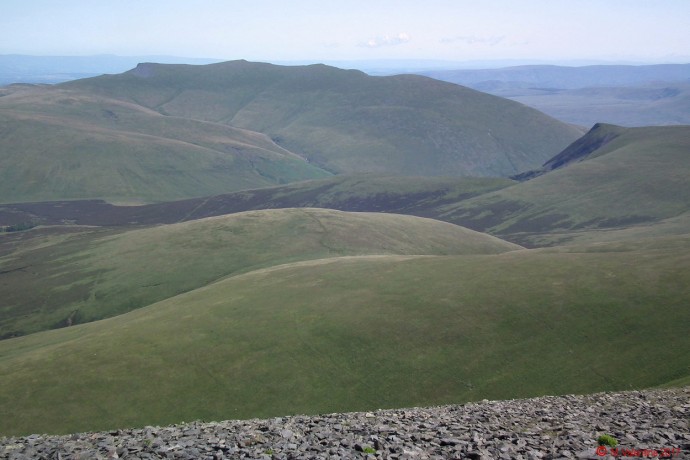 Looking towards Skiddaw Little Man, with Lonscale Fell & Pike to its left: - 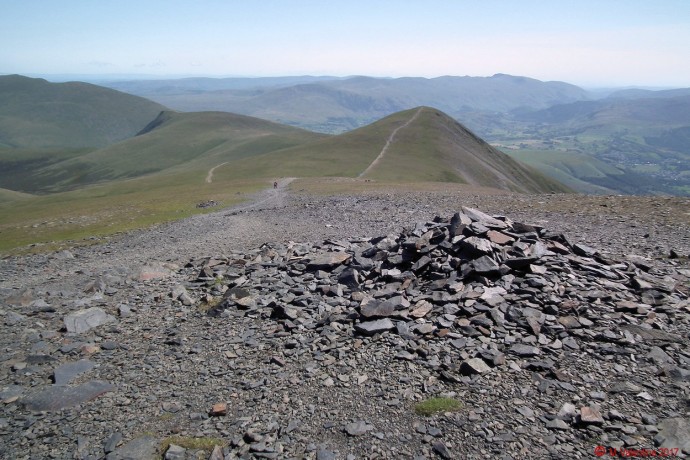 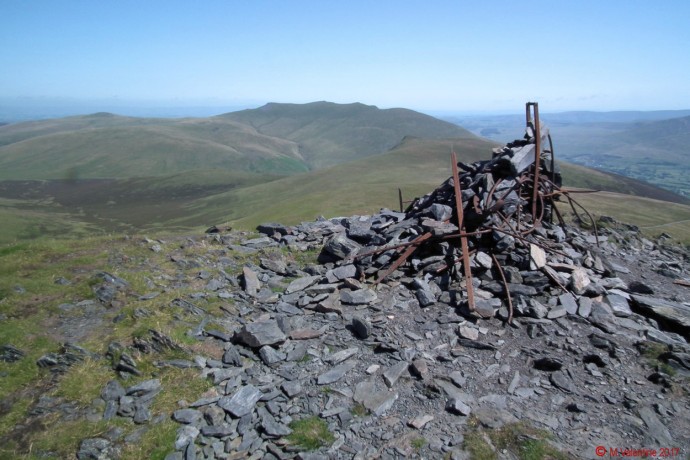 Looking back to Skiddaw from Lonscale Fell summit: - 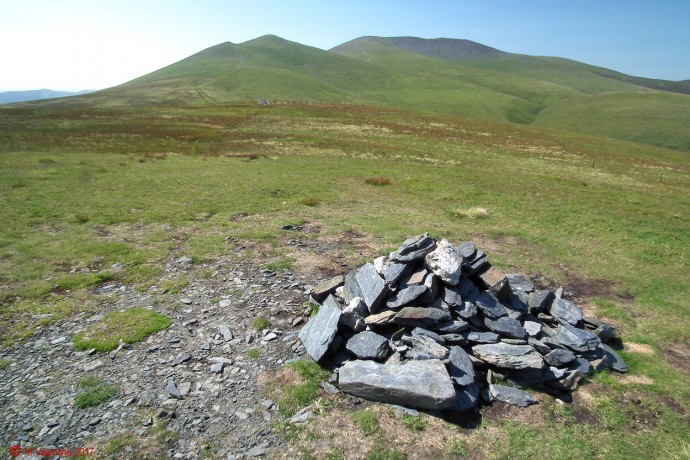 The view from Lonscale Pike, across Burnt Horse Crags to Great and Little Calva etc. - Skiddaw House can just about be seen in middle distance: - 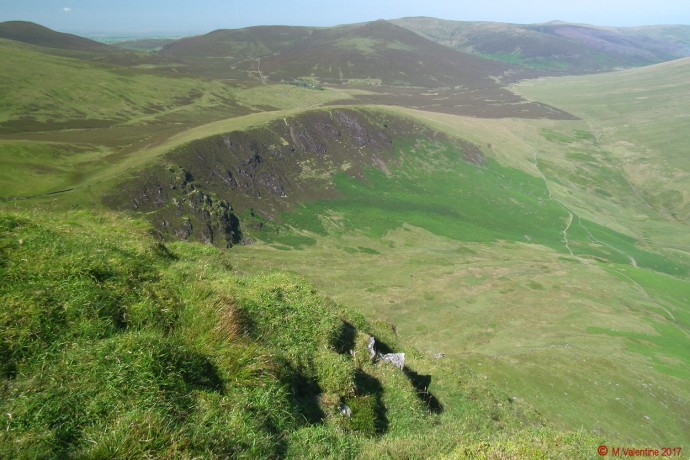 A lone Herdwick on Lonscale Pike. - Skiddaw House slightly larger in frame, over to the right: - 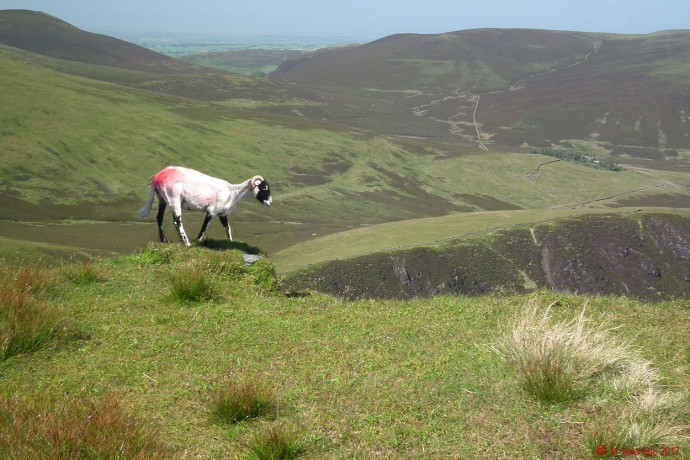 Looking across to Clough Head and the Helvellyn range, as seen from the top edge of the crags on Lonscale Pike: - 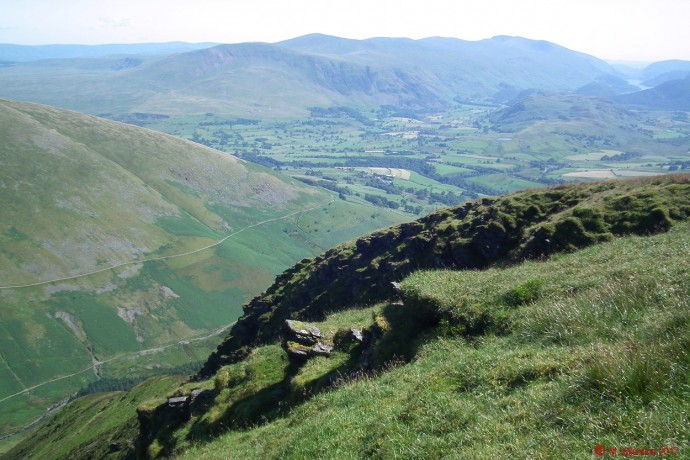 From Lonscale Pike, I back-tracked across Lonscale Fell as far as Flag Pots - (worth noting that it's quite boggy thereabouts!) - and then took the very indistinct track which follows Whit Beck before eventually rejoining the main Skiddaw track lower down the slope.

The parking area, behind Latrigg, was in view for much of the descent, which eventually took me past the Hawell monument before finally reaching the car: - 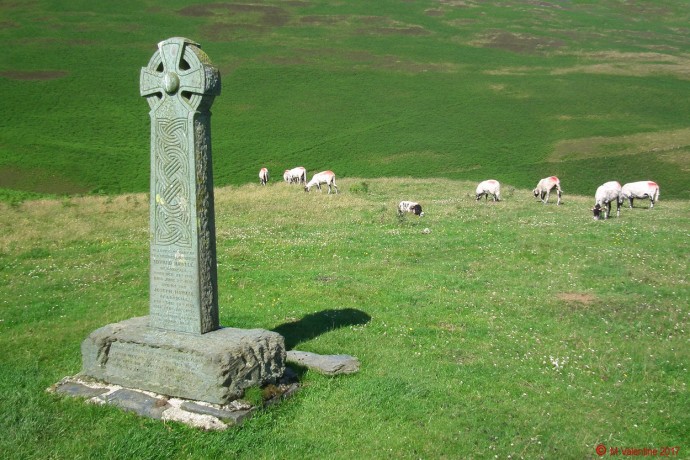 Another great day in the Lakes!

Once again many years ago (theme of my life these days!) I felt well on one particular day and (unusually for me!) I romped up through Dodd Wood with unusual vigour .... and exiting at what I think of as the top of the wood I decided to climb a few feet to see the view over the trees ... I found myself climbing and climbing and for once not being short of breath, I looked up and made my mind up, there and then, to go to the top of Skiddaw! The view was breathtaking all the way; the path was interesting especially a stretch through scree - the path no wider than my boots width ... finally exhilarated I came out on top and walked to the trig, which on my visit was the circular pillar and 360 deg disc. My two best memories are that swifts were flying around me at knee level and one of the sheep, hanging around the trig point, was intent on stealing sandwiches off the unwary and poking its nose into open rucsacs!! I came down at the back of Little Man (no energy left for anymore uphills!) down Jenkin Hill and Howgill Tongue and down Whit Beck (someone lose the 'e' off the end of this name do you think?) Through the car park and a 'loooong' yomp back to Dodd Wood calling for a pint of Shandy at the Hotel as I (was going to say passed it - but I didn't pass - I turned in!). The last part alongside the A591 was dreadful but I had no energy left to climb into the wood again. The distance was 9.5 miles - one of the longest hardest walks I've ever managed .... happy days!

I know the feeling when the energy runs out! - Prior to this, the last time I did Skiddaw was going on for 40 years ago, and it was during a prolonged summer "heatwave" - (With the weather these days, does anyone still remember them?). To make a bit of an excuse, we were on a backpacking holiday at the time, carrying all the camping gear etc. etc. (things weren't so lightweight back in the day!) - and I do recollect it being very hot going.

We ran out of steam after doing the Ullock Pike, Carl Side route. (We'd run out of liquids long before we got to the top of Carl Side, and were so desperate for something to drink that we got water from Carlside Tarn. Which, due to the prolonged spell of dry weather at that time, wasn't much more than a stagnant peaty puddle! I can well remember drinking that water, even though it tasted foul, and I could see a myriad of tiny little beasties swimming around in it!

After visiting Skiddaw summit we opted to miss out Lower Man summit, and, stopping for lunch, just before descending Jenkin Hill, I decided to have a boiled egg, (cooked previously), which I promptly managed to drop onto the grassy slope, only to see it roll away merrily. It continued to roll, and roll, and roll, - with me, weighted down by a monstrous backpack chasing after it! - It stopped a good 400yds down the hill - still completely intact! I chose to have lunch at that spot, while my friend who had been so busy laughing at me for chasing an egg, stayed where he was, and ate his lunch at the top. Just one of those tiny little things that happen every now and again when walking on the fells, that then becomes a life-long memory!