Initially I'd planned to start as I did but continue on over Ullock Pike and down & round the northern ends then back up Skiddaw. However with less wind than the previous days & blue skies the temps were much warmer & I was only on my middle day. So after sweating away on the climb up Carl Side, heading on & seeing the drop & massive haul back up to Skiddaw I'd have I changed my route a bit by backtracking from Ullock Pike to the col between Carl Side & Skiddaw I then took the path that goes directly up Skiddaw's side, avoiding the mad cyclists coming down it, before getting back onto planned route.

Thinking that parking would be no problem with my usual early start time I was surprised to find the car park pretty full, but people were coming & going out on Latrigg for the exceptional view that morning of a temp inversion giving the cloud sunk over the flat land & the tops in the sun. Unfortunately despite the mainly blue sky Skiddaw has cloud coming & going until I'd left it when it cleared.

The path up Carl Side & along Longside ridge was narrow but firm & visible, up the side of Skiddaw the path is very steep worn shale prone to slipping under foot a bit & I'd now say take it in ascent 1st time you do it, On top of Skiddaw & down over little man the path is a virtual motorway in width & people numbers although more skip round Little Man, out to Lonscale Fell there is a path either side of the fence but they are minor paths with wetness, down from it's top your following the fence on your right on a steep grass path until you come to a x roads with the Cumbrian way curving round the bottom that you join back to the car park. It was here that I dumped rucksack in car & bought an ice cream from a lady with van who also did coffee's thankfully as she said she'd only sold 2 ice creams the previous day but was busy that day. I then did the Latrigg bit starting off walking & eating ice cream, then pocketing the empty tub & binning it after going round Latrigg. 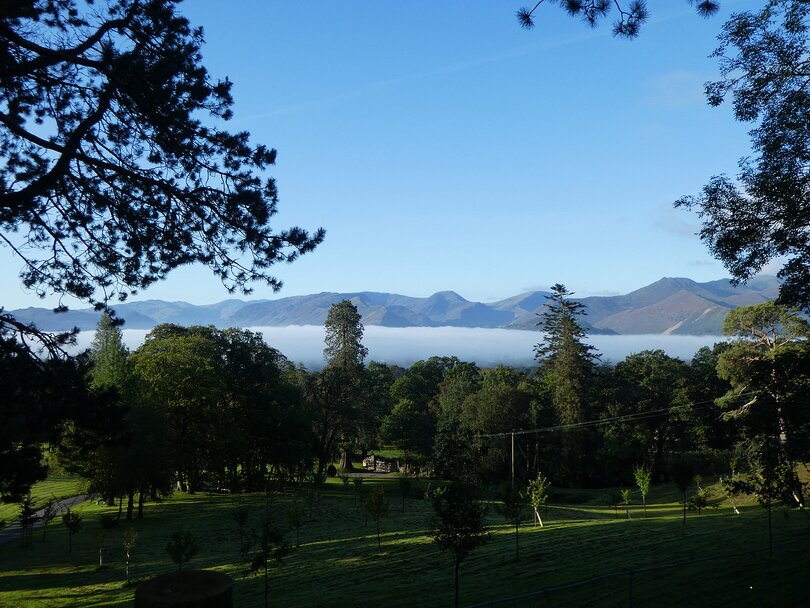 After starting up Carl Side, the mist still remained more over Derwent water & its close environs, but it was good to see the fells I'd walked my 1st day over on the right. Up to about a fifth of the way up & the mist was nearly gone,, a bit to many to name but to give reference Derwent Water is left & Newlands Valley heading into the fells centre About 1/3rd the way up Carl Side looking at Dodd, at bit later looking across I saw a lorry carrying logs on the track on Dodd ½ way up where a path goes off to Dodd, the view of many fells with Grassmoor centre back 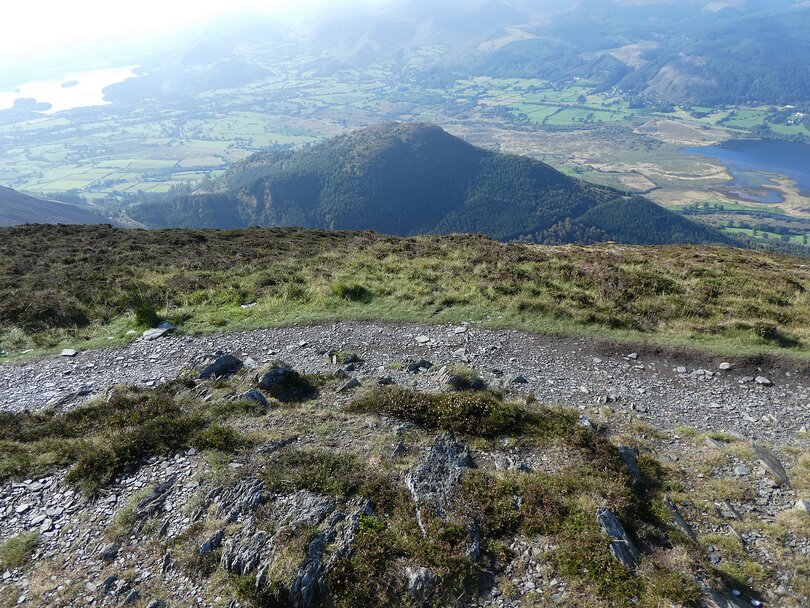 From the top of Long Side, looking down onto Dodd with its many trees. Looking along the ridge to the top of Ullock Pike From the top of Ullock Pike, Bassenthwaite Lake Still on top, the ridge down where I didn't go, although I did go on another 150m till it started dropping more

Same place, Longside Edge dropping left & Randel Crag on Skiddaw centre, if I hadn't altered the walk I'd have come up Skiddaw's ridge from the left. From just staring up the side of Skiddaw looking back at Longside Edge. Heading down from Skiddaw to Little Man Heading off Little Man the cairn is worthy of being called modern art with its collection of old iron fence posts, with Blencathra behind cairn that marks the true top of Lonscale Fell I belive, there is a bigger cairn slightly (170ft) north at the junction of paths so don't be fooled

From the little rise that's Lonscale Pike, I presume, out east of the summit above the drop, looking over Blencathra with it's back slope Mungrisdale Common From Latrigg, the fells L to R of Carl Side (part off), Skiddaw(rather hidden), Little Man & Lonscale Fell (part of) From different point on Latrigg, view of Keswick, Derwent Water & many of the fells I've been on. Same point as last, Clough Head & The Dodds with Low & High Rigg down below